If you’re running Debian Etch for amd64 you might want to install some 32bit applications, too. As some browser plugins (like Adobe’s Flash oder Sun’s Java) are available as 32bit binaries only, you may need a 32bit browser. In Ubuntu that was done very easily whereas in Debian this task needs a bit of extra work. So, here we go. (The original post can be found in German on debianforum.de. Thanks to “Linuxpeter”!)

First make sure those packages are installed:

“ia32-libs-gtk” is not in Etch’s repositories anymore so I downloaded version 1.0 from Debian’s unstable branch. Make sure the dependencies are met, which is by the time of writing only “ia32-libs” version 1.18 or greater. Install it as root by:

If not already there create the text file “/etc/pango32/pangorc” (of course you need to be root for all of this!):

And a little wrapper script which sets some environment variables as “/usr/local/bin/start32”:

Make it executable by:

And finally create a new symlink:

By default your new 32bit Firefox will use the same profile folder as your 64bit Debian Iceweasel (former Firefox). There should be no problem with that, as long as versions won’t differ too much. However, I’d recommend using a different profile. To assign a new profile folder to Firefox you need to create the folder first. For example this could be “~/.mozilla/firefox32/profile.32”. Start Firefox 32bit with this command:

You may want to write a little start script and place it in your ~/bin directory as “firefox32”:

You can then place a KDE or Gnome shortcut to this script on your desktop or simply type firefox32 to run 32bit Firefox.

Following this you may now install other 32bit apps, too. If those apps depend on qt, make sure to get the statically compiled versions of those applications. For example with Opera (and the same goes for Skype), select “Other/Static deb”, download it as “tar.gz” and follow the instructions above. Have fun!

EDIT: For Flock and maybe other Mozilla based browsers, you may need to adjust IPv6 support when using non-Debian packaged 32bit versions. At least with Flock I couldn’t browse the web without this modification: Type “about:config” in the browsers address bar, search for “network.dns.disableIPv6” and set it via doubleclick to “true” - that’s it! 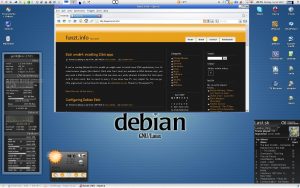