With Unity becoming Ubuntu’s default desktop we had to say goodbye to all those nice applets we got used to (or at least I did) while running Gnome 2.x. I’m especially thinking about sensor-, CPU- and system-monitor-applets. Those applets are not available anymore for Unity. Instead it’s making use of indicators. So I just fired up synaptic (still don’t like Ubuntu Software Center) and searched for “indicator” - and I pretty much found what I was looking for. :-)

Some of the indicators just start automatically the next time you log into Unity, others have to be started manually the first time. Let’s have a look at them:

This indicator is basically the system-monitor-applet from Gnome. You can configure it to show CPU/RAM/swap/whatever. Install it by

Then open dash, search for “multiload” and run it. You will see a nice graph indicating CPU load. By clicking on it a menu shows up and you’re free to configure it. This is how it looks like:

If you like to control CPU frequency scaling via indicator install this one:

It shows and let’s you control the current setting (ondemand, powersave, performance) of your CPU and will automatically show up once you’ve re-logged in again:

Missed the weather forecast in your panel? Just install this one!

You have to start the weather indicator manually once by searching for “weather” in dash. From there you may choose your location and get the weather forecast henceforth: 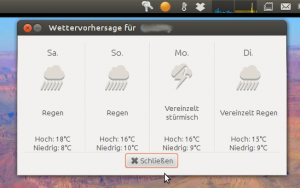 If you like to have a close eye on your computer’s sensor readings this is for you:

I’m not sure but I think this will also pull lm-sensors and hddtemp (don’t know because I install those by default). hddtemp will ask if it should start as daemon. Just say yes and keep all the defaults. lm-sensors has to be configured manually first by running:

I tend to just go with the defaults there as well and then let the setup modify /etc/modules automatically. Now search for “psensor” in dash and run it. It may take a short while (and will during all future logins) but then it’ll show up and you can configure the sensor readings: 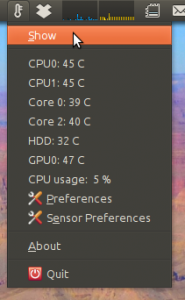 Though it’s getting rather crowded in the panel now I’m quite happy with this! ;-) Copy this to install them all: