Mozilla Firefox 2.0 has just been officially released! I’m using Firefox since the days of version 0.4 where it was still called “Phoenix” and I like where it’s going to. So, I just installed the Windows version and my first impression: doing great as always!

Before installing I removed the previous version and renamed the profile folder in C:\Documents and Settings\<_username_>\Application\Data\Mozilla to ...Mozilla_old. I think it’s always a good idea to do so when installing a new major version, though maybe not necessary. After starting Firefox for the first time the folder will be recreated and you can copy your bookmarks to the new profile (just copy over bookmarks.html from ...Mozilla_old\Firefox\Profiles\13245678.default to the corresponding new folder). Apart from some new eyecandy I’m beginning to appreciate the new spell checker while writing this. This is really a neat new feature!!! Also new is the “phishing protection”. You may choose if Firefox should compare URLs to a downloaded list or by asking a site like Google. We’ll see if this will do any good. I personally prefer the first method as I’m having no good feeling about telling Google every site I’ll look at… ;-) 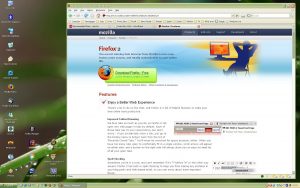